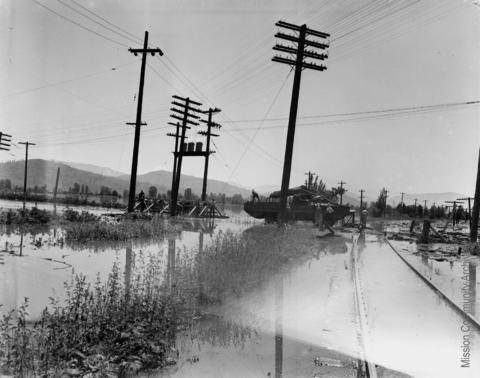 Born in Atchelitz, BC, Albert (Bert) Clifford (1916-2008) married in 1939 and after the war studied photography before moving to Mission in 1947 to start a business with his wife Madge. Within a year of establishing The Clifford Studio, the devastating flood waters of the Fraser River in 1948 seriously impacted the business. Being one of the few photographers in the community, however, Bert set out equipped with his camera to document the historic event, capturing the catastrophic destruction in Mission and adjacent communities. A number of his images were published in Nature’s Fury: The inside Story of the Disastrous BC Floods.

In the ensuing years, he was able to rebuild his business and in 1953 opened a new studio claimed to be the largest one in British Columbia at the time. Due to the post-war baby boom, photographing babies became a primary focus of the business along with bridal photography. Bert supplemented his income with press photography providing the majority of the images for the Fraser Valley Record newspaper between the 1947 and 1959 which documented day to day life in the community and events such as celebrations, funerals and weddings. After Clifford Studios closed down in 1966, Bert embarked on a new career in real estate, retiring in 1984.